I’m now in my fourth year of working for a small nonprofit, focused on workforce development issues. Until I was hired by the Central/Western Maine Workforce Investment Board, I knew little about the complexity of Maine’s workforce development system, and the strategic intersection it has to have with economic development, for Maine to have any kind of future in the 21st century.

When I began this job in August, 2006, my position had a loosely defined job description, with my primary focus being coordination with the business community. I was tasked to build a bridge from the public, to the private side. Partly, this involves the skills necessary for successful business development, as well as communicating the need for businesses to support training, as well as other initiatives designed to enhance our regional workforce in Central/Western Maine (a five county region, which includes Androscoggin, Kennebec, Oxford, Franklin, and Somerset).

I could have easily spent months spinning my wheels trying to figure out the myriad of details of how our organization fit into the mix of the larger county, state, and federal workforce development mix. Instead, I determined to find a way to hit the ground running, and not look back. One fledgling program, at the time, a mere localized pilot called WorkReady, which had run one time before I was hired, stood out to me. I sensed that rolled into that Lewiston-based program, everything I needed to know about workforce development, the catalyst I needed to reach out to the business community, and the desire I had to take the lessons I had learned, and was continuing to learn in my own life regarding reinvention, and share it with others in search of something more, were gathered there. My intuition couldn’t have been more accurate. With the advantage of time and history, it amazes me how prescient I actually was.

While it’s easy for an outsider to view the program and laud its recent successes, the journey to this point hasn’t been without significant challenges. Funding has always been tough to come by for a variety of reasons. Much of our success in getting WorkReady to this point can be attributed to having the ability to leverage and marshal a variety of resources and often unexpected funding streams. It also has been a positive example of what can happen when the right kind of collaboration is brought together to target and carry out a worthwhile task with clear goals and outcomes.

None of this has been an accident. In order for a program like WorkReady, in its original state, to have arrived to where it sits today, someone had to have the vision and foresight to recognize that WorkReady’s future hope had to be built upon a grassroots model. It required a roll-up-your-sleeves approach, and willingness to do whatever was necessary to cultivate the qualities of on-the-ground community organizing. Fortunately for me, I came to my job with considerable experience in that area, built through my activist work I had been engaged in prior, as well as my own entrepreneurial background and experience. Many, if not all of the partnerships I cultivated three years ago, have paid dividends far beyond what I imagined at the time.

Yesterday, I was in Waterville, at yet another WorkReady graduation. The ceremony was held at the REM Center, downtown. This local nonprofit has a wonderful function room in the old Sterns Department Store where we’ve held each one of Waterville’s four graduation ceremonies in. 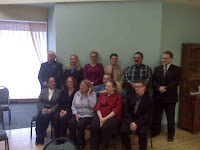 Twelve trainees were conferred a credential signifying that they had met each one of seven competencies, or standards required in order to graduate. This particular program, now 80 hours long, included the original 60 hour soft skills curriculum developed by Maine Adult Education, as well as an additional 20 hours of computer and technology enhancement. Normally, the training would take place over a four week period, which would be intense enough. This time, because of a variety of logistical constraints, had to be condensed even further, jam-packed into three weeks.

Adult Education programs deliver the curriculum, locally. Each director hires a facilitator, coordinates the classroom schedule, and in this case, also delivers the additional week of computer training. Both Lawrence Adult Education, in Fairfield, and Mid-Maine Regional Adult Community Education, which includes Waterville, Winslow, Oakland, and surrounding communities, have done a tremendous job partnering together, and delivering one of the better programs I’ve been associated with. Both Pat Theriault, in Fairfield, and Susan Tuthill at Mid-Maine have been instrumental in helping to coordinate our first truly regional program for WorkReady in the state.

My role is one of coordination. I help locate resources for funding, connect with business partners, draw upon my experience of shepherding the program from pilot status to one of the programs creating a “buzz” in the state—all of this gets to my point earlier—coordination is essential when you are working with a grassroots model. Without someone, or a couple of “someones” pushing things forward, the best laid of plans rarely move beyond mere idea, to boots on the ground, action.

I mentioned the funding piece. Initially, in order to get the program off the ground, a diverse group of community partners had to pony up resources. The Mid-Maine Chamber of Commerce, the Central Maine Growth Council, KVCOG, as well as Coastal Enterprises, Inc., and the Central/Western Maine Workforce Investment Board paid for the first program in October of 2008. WorkReady was part of a larger workforce development strategy that Kim Lindlof/Mid-Maine Chamber, John Butera/Central Maine Growth Council, and Ken Young/KVCOG and others in the community were coordinating, all focused on a larger strategic vision for economic development.

In fact, I had a conversation with Butera after one of the first meetings I attended, to present the WorkReady concept to members of the Chamber. I remember his words, as they’ve stayed with me and I think helped crystallize my focus about what I deem important in my role as director of business services.

For me, Butera’s point nailed it.

Since our initial two pilots in greater-Waterville, the program has been able to acquire additional funding from the United Way of Mid-Maine, through grants process connected to community impact funding.

Having acquired a grant in Lewiston, through the United Way of Androscoggin County to fund WorkReady in that community, I sought similar funding. Tina Chapman, president and CPO for the United Way of Mid-Maine indicated to me that they had a similar process in Kennebec/Somerset Counties. I put together an application and received $10,000 (of a requested $20,000 applied for), which has allowed us to focus on building sustainability in Waterville/Fairfield.

Despite our best efforts, the ability to offer the program twice each year was in jeopardy for January/February, however. KVCAP, one of our new WorkReady partners, indicated that they had ARRA funding through a Community Block Development Grant, coordinated with Maine DECD. This funding made the current program and yesterday’s graduation possible.

We’ve had high profile speakers for graduations before. Congressman Mike Michaud has attended ceremonies in Lewiston and Waterville. Jeff Fantine, director for Maine Adult Education was our keynote in Pittsfield, for our graduation we held for WorkReady involving laid off shoe workers from San Antonio Shoe.

I’ve viewed Richardson from afar, and was well aware of the good work he’s done on behalf of the people of the state. As happens so often, I gained an entirely new level of respect yesterday, however, seeing him in person, and having a chance to get a read on the man behind the public persona. It impressed me to know that he felt our graduation was important enough to take time away from the rigors of running for high profile public office, to offer congratulations, and support to the efforts of 12 people who have chosen to take the important next step towards jobs and careers. 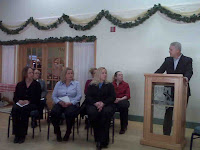 Richardson didn’t blow in, shake a few hands, give his speech, and get whisked off to his next campaign event. He took time to review each graduates portfolio during the 45 minutes prior to our ceremony, set aside for business people and other community members to participate in viewing the work that each graduate has been engaged in for the past three weeks. It was obvious that he possessed a genuine quality and connected very well with our graduates. Several later expressed to me how much his presence meant to them.

His talk was brief, but focused on elements of WorkReady, and he did a great job of tying these elements into the larger qualities that Maine has to capitalize on to succeed as a state. His four “ingredients for success” (my summary) were:

As I listened to Richardson, and serving as the graduation MC, I reflected back on the various programs I’ve been directly responsible for coordinating—26 in all since September, 2006.

I looked out and saw my colleague, Paul Scalzone, from CEI. I reflected back on our initial conversations we had back in the fall of 2006, some just a few weeks into my job, as we considered strategies about how he and I could marshal resources and develop the necessary partnerships that would mutually benefit both of our efforts in the five counties of Central/Western Maine. It was an important lesson about staying true and steady and not wavering from your vision and values. My experience is that if you are able to do that, and build strong collaboration with other like-minded people and organizations, then you will taste success, and often, exceed your original goals.

Kathleen has been a mentor of sorts, to me. A professional motivational speaker, and multi-talented beyond mere instruction, she has been someone who has helped me hone my own skills, and seek resources, and push my own development in new directions at her urging. She also is one of the few people I know who provides the kind of honest feedback that all of us need to get better.

I’ve rarely spoken to a WorkReady graduate from one of Kathleen’s trainings who didn’t gush about her abilities, but more importantly, her genuine compassion, love, and passion that she pours into each one of her students.

Once in awhile, a program or initiative comes along that is a perfect match for its time—the WorkReady Credential Program, or simply, WorkReady, is that kind of a program.

[The Morning Sentinel carried a Sat. feature on WorkReady, by reporter, Scott Monroe.–JB]